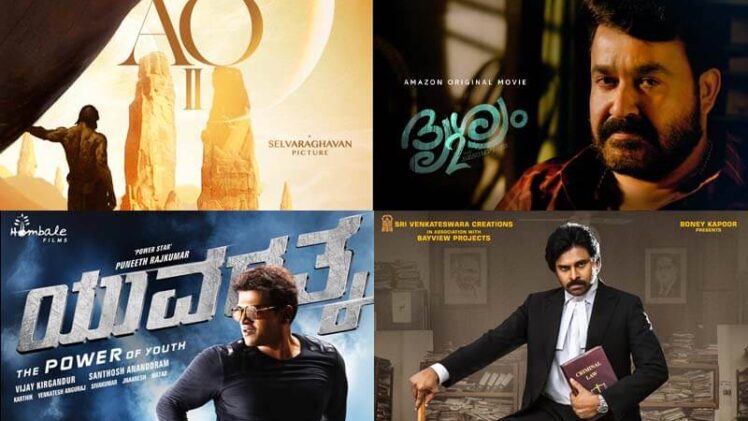 Roots of South Indian movies can be followed back to 1930s but was acknowledged by only a limited people (a few population), unlike the Hindi speaking which was very considerable. So evidently it didn’t made points  like Bollywood. Banner of Indian cinema was brought up till here because of Bollywood but upheaval in cinema culture of south convinces us that they are going to take the banner forward. In the last 4-5 years, there are many south indian movies which became huge success all over the country. It is one of the reason why best south indian movies dubbed in Hindi for the wider reach. There are plenty of reasons why south indian industry is growing. Please find below the couple of top reasons why south indian industry is growing.

with time, the South Indian Cinema soared high as the population of these states grew exponentially. Furthermore, legendary artists like Rajnikanth, Kamal Hassan, Anant Nag, Chinarjeevi and Mohan Lal made it big even in the Bollywood industry because of their exceptionally brilliant contribution to South Indian Cinema.

Today, it’s no more a secret that the South Indian Film Industry is rapidly growing and gaining its huge share of recognition all over India. It may even be said that it is taking over the craze once owned by the Hindi Film Industry.

Let’s look at a few other reasons why the South Indian Cinema is thriving and booming constantly.

South Indian Cinema back in days was trolled for their action in films but now tables have turned so significantly in terms of action choreography, fighting styles, camera angles and cinematography. Action of South Indian movies is revamping towards excellence. Very much evident in movies like Kaithi, Vikram Vedha and KGF. Kaithi was the highest watched movie on youtube in 2019 which confirms the popularity of south indian industry.

People have seen so much of same stories and are fed up of cliché movies. In today’s time Bollywood is full of same algorithm which is “remake” adding to shift of viewers to south Cinema. People want to experience new storylines and something different which is offered by South Cinema through their unique plot, storylines and characters. For example movies like Saho and 2.0

Movie industry of the South offers combination in the same film, they are not very precise to one genre you can see comedy action and romance creatively mixed in a single movie.

Moreover, movies in south are not combined to actors but to its script even a film of best actor can be a flop if the script is not liked. Actor is graded for his acting skill and script for its own.

Producers and Directors of the south are appearing as great stakeholders as they capitalise on the huge budget of scripts and not worry about the loss of money in short not very close-fisted what we saw in Baahubali.

Also Read: 3 Clever Ways to Do Prom on a Budget

Significantly, south Cinema is getting huge representation of their films. More eyes are turning to them for example Baahubali broadened markets for Telugu films in France even a Malayalam film Lucifer was an achievement in the south as well as overseas.

Lastly south stars have huge fan base which is very strong and increasing over time as even said by Rohit Shetty. Fans have formed associations of their respective heroes. There are Megastar (Chiranjeevi) Fans Association, NTR Fans Association, Mahesh Babu (Krishna’s son) Fans Association. People like Rajnikant and kamal hassan enjoy massive following even in the Hindi region. Youth finds joy and enjoyment in these activities. They go on bikes for promotion rallies, printing their pictures on the big banners along with their celebrities, pulling the attention of people by exclaiming taglines and glees.

South movie industry encompasses Tamil, Telugu, Malayalam and Kannada cinema which are constantly advancing in its reach, box office earning and scripts. To cut a long story short, south movie industry is on fire. That is the reason we can see remakes of south movies in Bollywood like Kabir Singh, Holiday, Gajni  and Dhrishtdhyum.

Which is your favourite south indian movies of all time? Let us know in the comments section!

Previous Story:
4 Types Of Cocktail Dresses That Can Make You Look Sexy And Appropriate

Next Story:
Steal The Celebrity Style- Here’s How To Wear Metallic Dresses