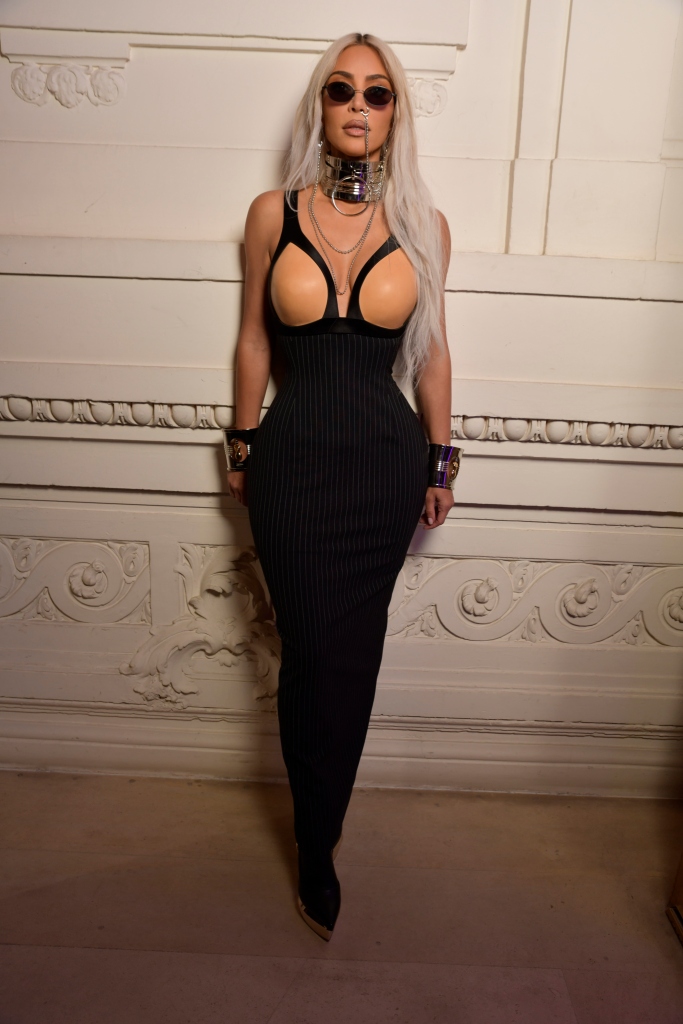 ALL FOR OLIVIER: One grand ballroom, two iconic designers and four generations of Kim Kardashian’s clan made for an energetic evening show when Balmain designer Olivier Rousteing showed his seasonal guest stint collection for the house of Jean Paul Gaultier.

Kardashian attended with maternal grandmother Mary Jo Campbell, mom Kris Jenner and daughter North West in tow, making it a family affair. Kardashian walked earlier in the day at the Balenciaga show. “It was a nervous energy, but it was great,” she said of her morning stroll on the catwalk.

Jenner added that Campbell had come in for the day of shows. “This is her last night in Paris for a while,” she said, pointing to her mother. She looked down the front row. “We have quite the lineup, even Anna is here,” she said, referencing Vogue editor in chief Anna Wintour, who was seated next to Kardashian. Kardashian and West were wearing matching nose chains, which were featured on the runway.

Colombian singer Maluma was soaking up all the vibes, and gamely posing for pictures with everyone. “I feel it’s crazy but I’m very into the world of craziness,” he said. “I’m seeing so many characters right now and I feel that’s what Olivier wants to show, so I feel like he’s doing a great job.”

He was seated across from Gaultier himself, who sipped Champagne in his seat, as well as a couple of male models clad in nothing but Speedos who were charged with carrying the train of one guest’s gown.

The “Emily in Paris” cast was on hand, having a few hours of down-time fun after wrapping a late-night shoot at 4 a.m.

Lucien Laviscount sported a bit of a gash on the forehead, an injury left after being mowed down by an electric scooter on his morning run. “Listen, I’m trying to keep 100 right now,” he joked of recovering after the fall.

Still he harbors no ill will to the city or its unsightly transportation dangers. “The city is on fire. The city is already magical to me but with fashion week and to see everyone stepping out in what makes them feel good, it’s wonderful,” he said. “Since I landed in Paris for the first time last year, my feet haven’t touched the ground. Literally this whole place is a museum with the roof taken off, like I’m living in a magical world and I don’t want the dream to stop.”

While he gushed over the city he said he’ll be here filming until the end of September. There is a project lined up after that, but it’s still “a little bit hush hush,” he added.

Camille Razat, who has been living it up during fashion week attending Armani and last week’s Celine show, arrived arm-in-arm with Laviscount and sat next to castmate Ashley Park. They were loving the chaotic excitement of the room.

Park, who plays a sometime drag king with an eclectic style, said the show has influenced her fashion choices. “I’ve become a lot more bold and elevated in my choices because of the show,” she said.

She was wearing a vintage Gaultier velvet gown for the occasion. “This was love at first sight. I’ve never had something like this happen. It’s the first one I saw and it was ‘Let’s try this one first,’ and it fit like a glove,” she said. “It was destiny.” — RHONDA RICHFORD

Nothing seemed to dampen his enthusiasm for the city, not even a recent collision with a stand-up scooter. He said with a grin that the healing “battle scar” he still sported on his forehead “added a bit of character.”

With the filming of episode three of the third season of Netflix’s “Emily in Paris” just finished, Laviscount wasn’t “counting the days yet” to mid-September when production wraps.

Plenty of time, then, to enjoy “sunset down the Seine,” his ultimate favorite part of the city, and top spots: “Paperboy, an amazing little sandwich spot, and you have got to hit Café Charlot [which] is like home to me,” he revealed.

Now in her third stay in Paris, costar Ashley Park also named the Marais, where she previously lived while filming, and the Tuileries gardens as favorite spots. “Lily [Collins] and I can walk around there for hours,” she said.

She zeroed in on the multitude of rings, chunky chain bracelets and pendants Laviscount was sporting, showing them off to the hosts of the evening, David and Sybil Yurman, in the courtyard between the store’s two distinct spaces.

This particular feature was a draw for chief executive officer Evan Yurman, who had envisioned immediately a more intimate salon away from the bustle of Rue Saint-Honoré.

“When they showed us, they said, ‘You can have a beautiful store here and store all your boxes back here.’ I said, ‘You haven’t met the Yurmans. The boxes can go downstairs,’” he joked with guests that included Taylor Hill, Alessandra Ambrosio and Coco Rocha.

For Harrier, her time in Paris was drawing to an end, after a weeklong stop that saw her attend Sunday’s Alaïa show and a dinner given by the Yurman family at the Musée du Louvre on Tuesday to commemorate the brand’s patronage of the museum, which will lead to the restoration of four important sculptures in the Tuileries garden.

She described the evening “overlooking the pyramid and the entire Louvre” as “a cool celebration of Paris and of French culture” perfect to also mark the “merging this iconic New York brand” with its new home.

The American actress, fresh off the filming of the remake of 1990s sports comedy “White Men Can’t Jump,” was looking forward to the next stop of her summer in Europe — Italy. On the cards were enjoying the sun and sea with friends, being on a boat and indulging in her favorite dish.

“I’m a pasta girl through and through. I’m very excited to eat some spaghetti alle vongole,” she said.

It will be a busy fall for the “Spiderman: Homecoming” star, with the launch of a show on Hulu titled “Mike,” a mini-series on the life of heavyweight boxing champion Mike Tyson, followed by the late September debut of “Entergalactic,” a Netflix animated series based on the upcoming album by American musician and actor Kid Cudi.

Also slated for an Italian summer is Golding, who is living in Rome with his family — wife Liv Lo Golding and 15-month-old Lyla — as he shoots “The Old Guard 2” with Charlize Theron and Uma Thurman.

“It’s never bad to have a summer in Europe…unless it’s 100 degrees every day — which it is in Rome,” he sighed. — LILY TEMPLETON

FRAGRANCE FETE: Hundreds flocked to Paris’ Palais de Tokyo museum Wednesday night to get a dose of Good Fortune — the new perfume from Viktor & Rolf, that is.

The event took place hours after the brand’s couture collection was presented. It featured a dance performance by FKA Twigs, the face of Good Fortune, to the song “Killer” that she wrote and recorded for the fragrance campaign.

Twigs also took part in a voguing dance competition, which had numerous sessions with members of the Paris ballroom scene taking part. That was presided over by socialite and artist Kiddy Smile. 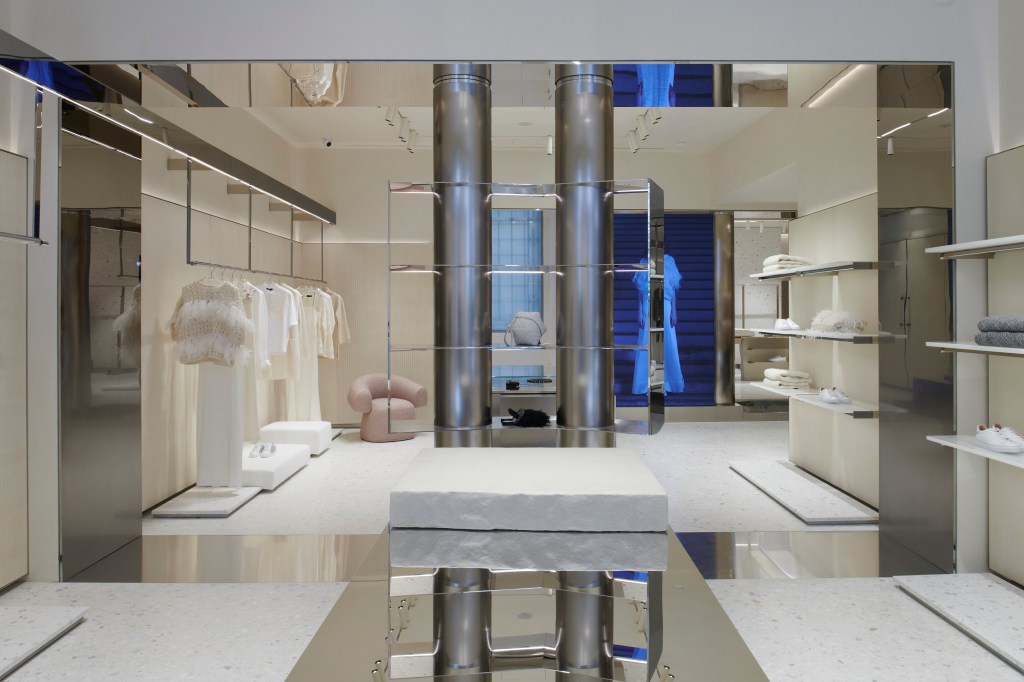 Previous Story:
Fabiana Filippi to Open up Branches in U.S. and China – WWD 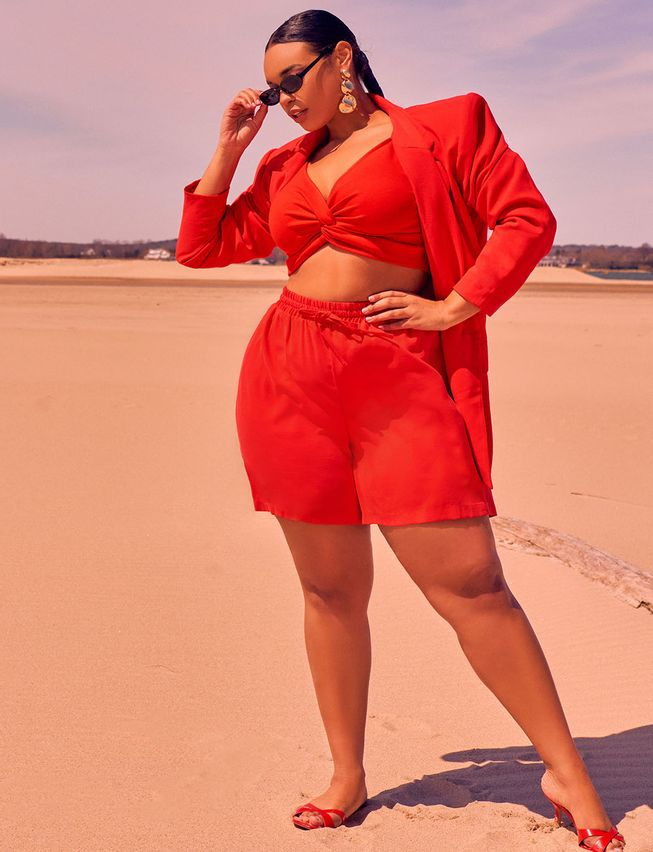 Next Story:
15 Must Rock Plus Size Shorts to Keep it Cute this Summer