Of gender identity and sexual preferences: What it means to come out as queer in the Tibetan community

“When I was backstage, I was so nervous. I was shivering. I thought people would throw chappals, tomatoes and pebbles at me. Then, the host announced my name. I went up and without greeting them, turned to the wall. The spotlight hit me. And then as they played the song… I forgot everything else and just focused on the song. I couldn’t see anyone. At the end, all I could hear was people asking for more.”

Mariko recalls her first time coming out as a transgender woman at the Miss Tibet pageant in Dharamshala in 2015. She says it was one of the noisiest concerts in McLeod Ganj. Born a male, she went from identifying herself as a Buddhist monk to a dancer and makeup artist.

Even though Mariko has emerged as an influencer and a celebrity in her own right, her story seems to be an exception.

Till now, there have been very few Tibetans living in India who publicly identify themselves as queer, — a minority within an already minority community.

Dolma (name changed on purpose), a 24-year-old Tibetan, came out to only four of her friends in 2020; none was Tibetan. “Coming out was not that glamorous or a celebration, especially when you are in a community that doesn’t even talk about it,” she says.

Since her schooling days in Rampur, Shimla, she says she had always looked at girls in a different way than how her friends did. “I’d never say it out loud, but I have never looked at women in the sense that ‘they have bad hair’, but just how they carry themselves and how they are around people. The sensuality of women.” 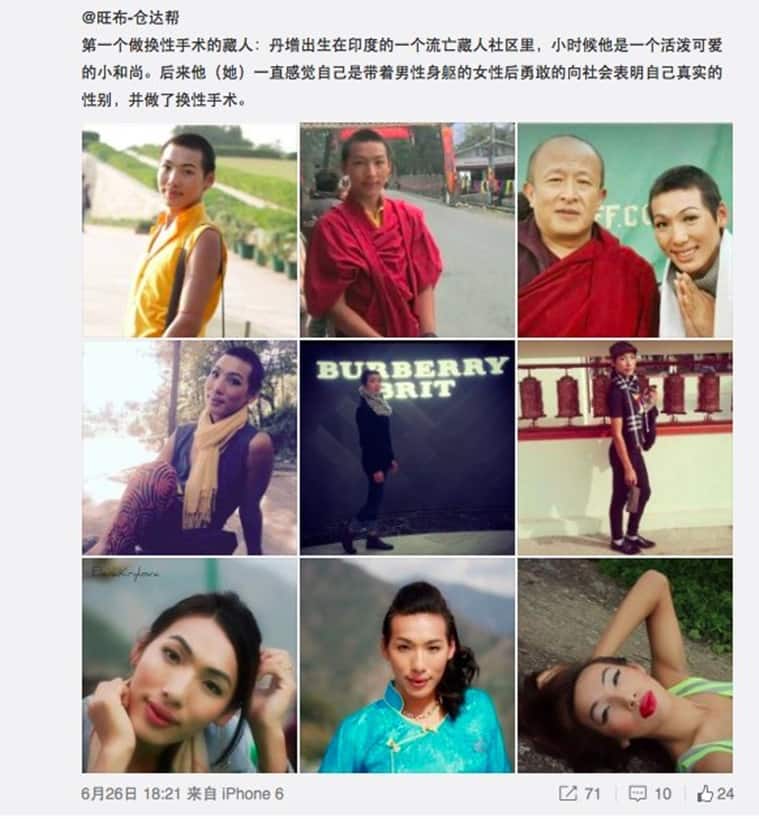 Mariko, first Tibetan Buddhist monk who came out as transgender.

In Rampur, while living with her family and uncles who she says “ridicule and mock queer people”, she never questioned her sexuality. It never occurred to her that her way of looking at other women had any bearing on her sexual preference.

Apart from a few of her Indian friends, she does not plan to come out to her family or anyone in the Tibetan community.

Meanwhile, Mariko, who has over 30,000 followers on Instagram, says, “Society has changed over the years, now they’re coming to me and saying hi.” Her current popularity contrasts with her childhood experience in Tibetan Children’s Village School Suja. Back then, she was bullied as she was the only boy with an all-girls friend circle.

“They used slurs, and I don’t even want to repeat them. Even thinking about that makes my blood boil,” she says. “The teachers were mean, they never supported me. Whenever they were bored, they would just send me on stage and make me dance for no reason.”

At one of her recent dinner parties with 30-40 people at the table, she says, “an educated person came up to me and said, ‘Do you have boobs’?”

But these instances remain in the past, as she lights a cigarette and waves to the people greeting her while walking on Dharamshala’s Bhagsu Road. Even on social media, she says, she hardly receives any negative comments anymore.

Back in 2016, another Tibetan came out as gay on his YouTube channel on his 24th birthday. “I would curse God for not only making me this way but also putting me in a society where LGBT is never talked about. But look at me, I am breaking the boundaries for you,” his video description reads. However, it has been a year, and he is nowhere to be found on any social media platform, including the very YouTube channel on which he uploaded this video.

When it comes to coming out to the Tibetan community, Dolma adds that it is different from coming out to an Indian community. “As for older Tibetan people, I don’t even think about coming out. The younger generation, I am not generalising, but they are more focused on shallow things,” she says. Despite looking modern and presenting themselves to have an understanding of ‘queerness’, Dolma says, “they don’t want to read about the pronouns that are used around. And why it is important to use pronouns with other people.”

Some new-age Tibetans are still trying to change this attitude. The Tibetan Equality Project (TEP) is a case in point. TEP is a platform built specifically for the Tibetan queer community that consists of queer Tibetan “collaborators” from around the world. A project that began in New York City, TEP invites queer Tibetans to attend virtual meetings that are open to any queer Tibetan in the world. 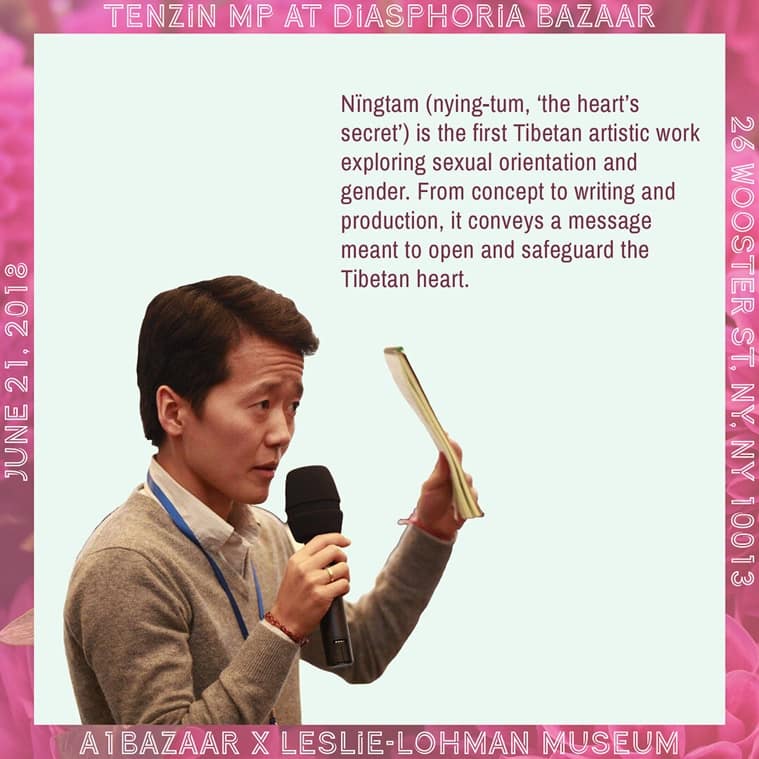 Tenzin Mingyur Paldron at one of his workshops for Machik Weekend

TEP recently took out a procession on June 5, at the Queens Pride Parade in New York City. Mingyur Paldron, a transgender Tibetan scholar, was part of the march and has recently become a regular collaborator. Paldron, 37, was born in India and moved to the US in 1989, one of the first Tibetans to live in America at the time. He has a PhD in Rhetoric with an emphasis in Gender, Women, and Sexuality from UC Berkeley.

“While activism is wonderful, it’s not a word I usually use for myself. I think of myself as an individual and sometimes a teacher,” Paldron says. On the day of the Pride march, he posted on his Instagram, holding a sign board ‘Tibetan Trans and Proud’.

Paldron educates and speaks on gender identities to college students, and conducts workshops. His recent works include ‘Wellness and Social Change: An LGBT+ case study’, an analytical workshop for the Machik Weekend. He directed, produced, wrote, edited and helped fundraise for ‘The Heart’s Secret’ – the first Tibetan LGBTQ+ moving image work.

On the subject of Tibetan realities, queer and otherwise, he says, “I think there is a tendency in any society for a dominant culture to emerge and make people assume certain things about themselves and others.” He adds many of us don’t question these assumptions for a long time, if ever. “This can lead to unhappiness — this unhappiness is of our own making. I think activism is about noticing unhappiness in society and addressing its roots.”

According to the research paper ‘Tibetan Perceptions of LGBTQ’ by Lauren Champagne, “The focus of many Tibetan institutions in exile is on human rights abuses in Tibet. There is very little attention given to social inequalities and injustices within exile communities. The rhetoric amongst Tibetans revolves mainly around Tibetan identity, ignoring the intersection of other aspects such as age, sexual orientation, and ability.”

Champagne says he cannot speak on this topic anymore as the paper is quite dated. Paldron agrees that the discourse within the Tibetan community is overshadowed by political identities, leaving little space for other identities, including gender. Calling it “very detrimental to our political goals,” he says political empowerment and new political possibilities come about when individuals feel whole and empowered. Dolma’s perspective, however, is different. Based on her personal experience, she says what lies at the core of Tibetan discourse, including how they perceive its queer community, is “ghettoisation”. “The Tibetan community lives among themselves and at the end of the day, they just listen to what other Tibetan families are going through. That way, you are not open to other opinions and perspectives in life,” she says.

Paldron agrees this level of interconnection outside of Tibet is not only quite unique, but also profound. However, he says, “From my perspective, it means possibilities are very tangible — both wonderful possibilities and damaging ones.”

On the positive side, this level of interconnectedness provides an opportunity to become aware at the same time. “This places transformation within reach,” he says.

Geshe Lobsang Dakpa, a Buddhist monk and a religious teacher at Dalai Lama’s Temple, McLeod Ganj, has known Mariko since her days as a monk. He says, “When I first saw her after her transition, I was not as shocked as I thought I‘d be.” He describes that moment by saying, “This is what she has chosen and she looks happy”. He calls her “a good friend”.

“There is no gender in Tibetan Buddhism, apart from the biological difference based on which monks and nuns are segregated. The focus lies on the individual and how they are as a person,” the elderly monk explains.

So, despite queerphobia within the community, there are those who are willing to accept a new perspective on gender identity and sexual preferences. To quote Tibetan spiritual leader His Holiness The Dalai Lama from his 2014 interview with Larry King, “Same sex marriage is a personal business. If two people are happy and both of them feel more satisfied with each other, then okay.”