‘In this country, there are unrecorded, undiscovered textiles in every village and town’: Ritu Kumar

While many Indian fashion brands can be credited for putting Indian fashion on the global map, there are few who have given forgotten Indian textiles and crafts the respect and recognition they deserve on a global scale — The House of Ritu Kumar takes the title home.

Helmed by the ‘matriarch of Indian fashion’, craft revivalist, and design doyen Ritu Kumar, also a Padma Shri awardee, the brand’s exemplary 53-year-long trajectory is built on one unshakeable foundation — the dictionary of indigenous textiles, prints, craft forms, and embroideries.

In an exclusive interaction with this outlet, the fashion designer takes a look back at her journey that started with two tables and four hand block printers in Kolkata, to 93 retail stores across the country, 5 sub-brands, and also talks about the evolution of ‘Indian’ fashion. Edited excerpts:

Did you envision establishing the brand in the way it has, or did it surpass your expectations?

You see, we are talking about the 60s, which is just post-Independence. I got a scholarship to study art history in New York, and during my studies, I realised we never taught the history of Indian art in our curriculum. So, when I came back to India, I joined the Ashutosh Museum in Calcutta for a curatorial course wherein we also studied the aesthetics of Indian painting, sculpture, and so on. And as part of this journey, I happened to go on an archaeological dig to a place called Chandraketugarh, and thereby, I slowly discovered that I had possibly hit upon one of the phases that, perhaps, is responsible for today’s evolution in Indian fashion. The British had come there, so had the Dutch, and the French, and all of them had colonies down the river and exported silks from Bhagalpur, and cotton from Dhaka; I am talking about the 16th-17th century, an era that was largely responsible for the fashion in Europe and perhaps around the world. But, we didn’t have any books or record of what was being made in Bengal 200 years back. So, I embarked on a strange journey — I went from museum to museum all over Europe, particularly France and England because they were the two big countries who were exporting, and dug out Indian prints from their museums which they would sell to me for a certain sum. I brought them back, reworked, and expanded them in the printing unit I started.

But then, there was no place to sell things. I did not know where to sell even the 10 saris we made; there were no retail places or even any cottage industries. The colonial rule had stripped the country of all its crafts work, it was highly taxed, and they took all these prints and replicated them all over Europe. As a matter of fact, there is a town called ‘Paisley’ in Scotland which was a real rip-off, and they wrote volumes on the studies they had done.

So did I see that this would happen? No… What we’re seeing in India today is a miracle, but I did realise that India is sitting on a treasure trove of designs. Despite doing five collections, I have never faced a situation wherein I don’t have a design to discover, because somewhere or the other in this country, there are unrecorded, undiscovered textiles in every little village and town. “I did realize that India is sitting on a treasure trove of designs.”

Do you continue to be inspired by India’s textiles, even after decades of working so closely and widely with them?

Absolutely. For one, there was a very nationalistic fervour at the time I started. Mind you, (Mahatma) Gandhi had used textile as a political tool — that hasn’t happened anywhere — so khadi was something we loved. We used to wear khadi and Kolhapuri chappals, printed Jaipur kurtas and jholas to college, and we grew up during the time when thinking that none of these craftsmen will have any work was really not acceptable, so one kept doing it. The more I traveled, the more I discovered what we had lost. I did the zardosi revival, the hand block printing, I did a line of leather in Calcutta and home furnishings. And not just me, there was a battery of people who really put their heart and soul into it.

Back in the day, for a woman to set up and run a fashion brand and grow it in this scale must have come with its challenges. Do you think the struggle for women in the fashion industry is still present?

If you talk about design and fashion in this country, it is a very tough business. And when you talk about the women in it, they face the same challenges that any woman who works faces — children, homes, travel, and constantly having to make choices on your time. But what really used to keep me going was seeing the changes in the area that I was working in. Like in Gujarat, where we were working, the women had bank accounts, they became self-sufficient. Same in Lucknow. These are all stories which people didn’t even realise started in the 70s and 80s. I think if Indian designers and crafts people have brought it to this level it is very well deserved because it was quite hard back in the day — you had to walk for miles, you didn’t know where you were staying, there were no phones, there was no transport, there was no place to sell…

Reliance Retail acquired a 52 per cent stake of the Ritu Kumar group. What made you greenlight this alliance and how are the visions of the two companies coming together?

This happened because my son told me ‘how long are you going to run this as a mom and pop shop?’ And true, as I had archives that were so large and vast, and I was barely using a small percentage of them. So we got a first chance of investment from Everstone Capital some years back, my son put up 2-3 other collections — one for the younger people, another for daily wear, etc., because they had the finances to move it forward. I actually did really want almost every person in this country to have access to what I had learnt about Indian fabrics, and understand the genius of the printers and embroiderers in this country, and that is not possible unless you have an alliance. You could be having ten stores, and that also has its limitations. Indian fashion has undergone monumental changes in the past two years. Do you think the perception and image of what is ‘Indian fashion’ has changed?

When I used to go abroad, I realised that people were totally unaware of India and its very specific role in textiles, which is very individualistic and came from an organic root. The colonial image of India was that men were dressed like fakirs and women like tribal people. There was no appreciation or understanding of draping of our fabrics, or even their cutting and layering. It was one colonial idea that India is an exotic place to get ideas for designs. When I said, “No, we wear these things,” it was almost a bit of a surprise and it’s taken forever to change that mindset.

And the pandemic has definitely brought us closer to the kind of shapes and styles that India has always worn. This is because the structure and the brainwashing was not necessary; it became very individualistic, especially with youngsters, thanks to exposure to the rest of the world which was, at the moment, buying and selling a lot of Indian prints. 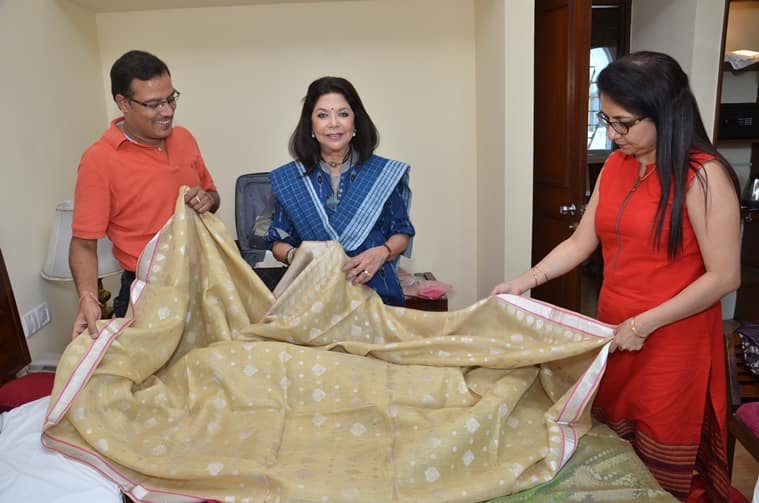 “India is a very dramatic country. We like to dress up for every function or every tyohar, not many countries have that ability to be able to consume so much fabrics and enjoy it.”

For a brand with a scale like Ritu Kumar’s, how do you tackle sustainability?

None of these designs are mine, I still go back in history for my collection. I have researched and sourced things that have been there for 1000-2000 years. Vegetable dyes have been around and so have been the weaves, so what I have done is underlined the fact that these were masterpieces of designs from our continent. Being an artist, I can redraw them, I can get a strap of fabric from a museum in Europe and recreate it for Indian person.

When I started my hand block printing, there was no paisley to be seen, no borders, no bootis. When I did my first slot of printed sarees in Murshidabad silk, I had people from Surat and Banaras coming to use them as designs for their mills. Suddenly, we saw Indian motifs in the Indian market, so there is a plus and a minus to all of this.

What part of your job excites you till this date?

Almost on a weekly basis, people come to sell me old fabrics. At the time when palaces were being broken down and go-downs were being emptied, people were selling very beautiful pieces and moving to synthetic… And every time a lot comes to me, I am amazed at the quality, at the diversity and that excites me to no end because I know this is not in the market and I would like to re-introduce it. And, of course, India is a very dramatic country. We like to dress up for every function or every tyohar, not many countries have that ability to be able to consume so much fabrics and enjoy it. That doesn’t mean you have to be size zero or a certain age. The most beautiful sarees are wore by older women, so that’s also another amazing thing about this country.