How the sari changed meaning on the Cannes red carpet

There’s this image of actor Deepika Padukone in a Bengal tiger-stripe couture sari, from the Cannes film festival, that its designer Sabyasachi Mukherjee says has several stories to tell. Like the fact that each of the stripes was block-printed and hand-embroidered with sequins, an example of our traditional craftsmanship that could fit as easily as her bustier amid the high fashion on the French Riviera. Or that the chandelier earrings could easily blend Bengal’s heritage with art deco just as the gilded mathapetti could mimic a contemporary tiara.

A jury member at the festival this year, Padukone is not alien to cosmetic endorsements and the cross-branding with international designers they entail. Yet she prioritised her role as a representative of modern India that learns to reinvent and repurpose tradition but is conscious of its identity. That ease was more evident when she breezed past with a casual retro look in Mysore silk shirt with a digitally-printed vintage flora and pleated trousers, again by Sabyasachi.

In the end, it looked like Padukone was playing the part and had prepped for this role with as much meticulousness as she does for the characters she plays. No less than thespian actor Shabana Azmi reminded us about that as she tweeted a photo of herself and her co-actor Smita Patil on the Cannes red carpet in 1976, without any hype or self-consciousness but comfortable in their skin and the sari. This was a time when the sari was an extension of who they were. Both were accompanied by their director Shyam Benegal for their film Nishant. Azmi recalled the moment, writing, “At Cannes for #Nishant 1976. We had no publicity material and no money so #Shyam Benegal asked #Smita Patil and me to wear our best saris and walk up and down the promenade to attract attention. And when people turned around to stare at these strange looking exotic creatures, we would persuasively plead ‘Our film is showing on so and so date, please come to watch it’ and we managed a full house! That was the advertising acumen of #Shyam Benegal.”

Shyam Benegal Smita Patil and me in Cannes 1976 with our film Nishant pic.twitter.com/1Bu5bRvUjB

Legendary actor Sharmila Tagore, who was a jury member at Cannes 2009, showed that you do not need embellishments or extra thought if you are confident of your carriage and personality. In her trademark personal style, reminiscent of the royals of yore, Tagore did her day photocalls in floral chiffon saris and the pearls she is known for, choosing traditional silk and matching jewellery for evening dinners. As juror, Vidya Balan, too, followed her predecessors’ footsteps in 2013, with a little help from Sabyasachi but keeping to her sense of comfort. She went traditional with an olive green silk sari and a burgundy full-sleeved blouse, a bun, bindi and a dash of jewellery, completing her look. She even carried off a red tulle saree and a pearl necklace with equal elan. The only thing “designer” about actor-director Nandita Das, who presented her film Manto in 2017, was a golden zari sari by Anavila Misra, as she tied her hair up in a regular bun and wore jhumkas for effect. None of them really overpowered the sari in any which way and easily adapted it to their own stories. They were not just mannequins, they imbued the sari with their individuality.

Over the years, that “ease of wearing” a sari has given way to the “need for presenting” a sari and a classical culture statement has been turned into an adaptive and fluid global drape that’s open to interpretation. What Azmi called Benegal’s acumen has been mostly frittered away these days as contemporary icons live out their brand commitments and desperately seek French approbation for carrying off their couture with Asian flair. Contrast the bellowing black Dolce gown with flowers or the shocking pink Valentino suit that Aishwarya Rai Bachchan adorned as part of her beauty brand commitments. Dramatic, yes. If fashion is about a statement, she made it. Yet she looked totally “worth it” when she debuted at Cannes in 2002 for the premiere of Sanjay Leela Bhansali’s Devdas in a Neeta Lulla sari or turned heads in 2010 in a sheer embroidered Sabyasachi sari. 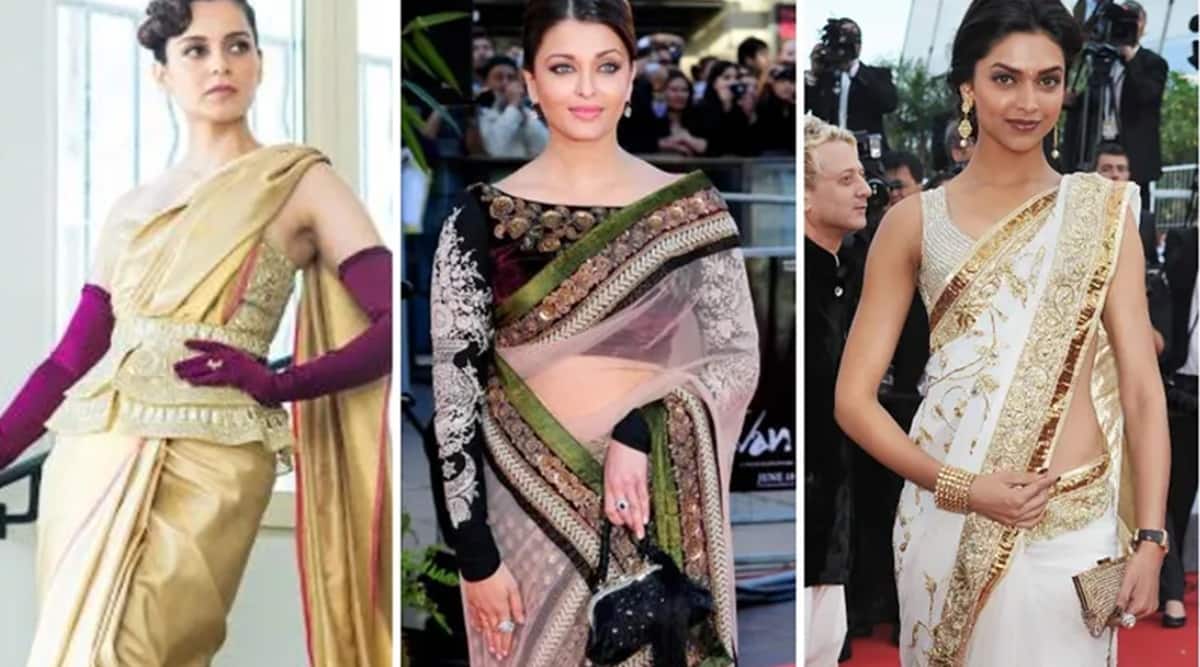 Indian celebrities have often made appearances in sari at Cannes

That same year, Padukone sashayed down the red carpet in her first sari, an elegant ivory and gold creation by Rohit Bal, her plunging sleeveless blouse and sleek, swept back bun making her stand tall among peers. Actress Sonam Kapoor broke the classical look in 2013, when she wore a vintage-inspired golden and white sari layered with a jacket by Anamika Khanna, topping it off with a big nose ring. The following year, she chose a salmon pink cape-style sari-gown and a choker on her neck. Kangana carried this experimentation forward in 2019, when she turned heads with a golden Kanjeevaram silk saree and a strapless blouse from Madhurya, accessorising herself with a custom corset belt by Falguni and Shane Peacock and wine-red opera gloves.

Her Indian meets global chic look also anchored what fashion czar Alexander McQueen and French designer Jean Paul Gaultier had been doing for some time, adapting the sari as gowns or dresses and liberally sprinkling their collections with Indian motifs, intricate embroidery and patches of craftsmanship. As designer Anju Modi, who has been the go-to person for director Sanjay Leela Bhansali’s heroines and who has styled Alia Bhatt, said, “The drape has now been taken to a different level altogether with the sari gown featuring in somebody’s collection or the other. The Indian and Western polarity has dissolved and the sari is, therefore, being reinterpreted in many ways. It needs to make a definitive statement at every outing on the global stage, given its iconic appeal. But we must remember that our craft tradition lives with us and we need to showcase that in whatever we choose to wear. It just melts into global silhouettes. If anything, a sari, more than an identity statement, is your own fashion signature.”

She is all praise for the young Alia Bhatt for her appearances in a sari during the promotions of her film Gangubai Kathiawadi, particularly the white sari she chose for the Berlin premiere of the film. Modi wishes that more celebrities can adapt India to their sartorial choices. Given the bevy of outings by our established stars and starlets in every Western label, from Elie Saab to Dior, it is not difficult to understand the angst of our designers. Is it the need to “look” the global Indian or play up to established norms of chic than forging one’s own path? “It would be so easy to blame it all on the colonial mindset. But you have to see how markets dictate the choices of our younger stars. May be they wear so many foreign labels themselves that they do not look for Indian wear. Their idea of glamour is rooted in Western wear, with exceptions of producers like Sanjay Leela Bhansali, who insist on the sari for international promotions. May be, more filmmakers will encourage such outings and change the market dynamics that pressure these girls into becoming an international face. Until we change that mindset and most importantly, we are comfortable with who we are and what we represent, we cannot wear Indianness on our sleeve.”

A thought seconded by designer Ritu Beri, who showed up in Cannes in 2000 in a sari and an adapted lehenga-jacket combo. Says she, “The Cannes red carpet is a platform to show the world what it has never seen, a modern India that is steeped in tradition and knows how to reinvent it. If we are to really break stereotypes, then it is just not the sari, we need to draw on our artisanal crafts. They should be our natural choice. So, our stars need to use this platform creatively, selectively and interestingly. It is an opportunity for projection like no other.”

Couturier Tarun Tahiliani, who has just showcased his global Indian collection featuring modern cuts, unusual textures and an intricate detail of prints with zari and resham, however, feels that too much noise is being made about the projection of Indian fashion on the Cannes red carpet. “In the end, it’s a festival to showcase films and it is difficult to gauge what effect individual fashion statements will have. So as a designer, I do my own thing. But be it a traditional or experimental sari, people have to be comfortable with what they are carrying.” Because that shows over everything else. Can we claim ownership of the sari, embody it and make it India’s finest jewel on the Riviera instead of confining it to just another photocall?