For Ukrainian street artist, paintbrush is mightier than the rifle

Gamlet Zinkivskiy is fighting the Russian invasion with a paintbrush, creating murals he hopes can boost morale and provide a brief antidote to war in Kharkiv, Ukraine’s battle-scarred second city.

Its best known street artist says his works are apolitical. But one on plywood that has sealed the entrance of a municipal building gutted by Russian warheads says otherwise.

The three-meter-high (10ft) painting of a gasoline canister and bottles with rags stuffed in their necks memorializes the petrol bombs made by civilians to help thwart Russia’s onslaughts on Kharkiv and Kyiv in February.

The mural’s title, inscribed in bold Cyrillic letters, is “Hospitality from Hell.” 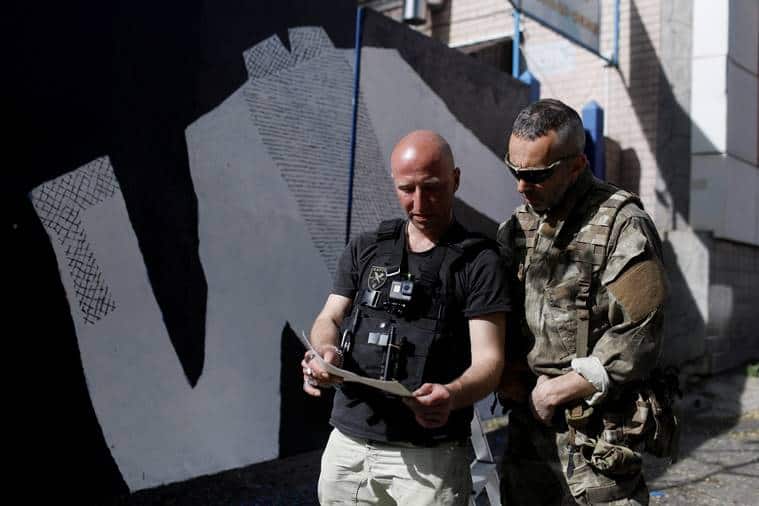 Gamlet Zinkivskiy shows the art project, next to his painting in the background, to his commander Vsevolod Kozhemyako, amid Russia’s attack on Ukraine, in Kharkiv. (REUTERS/Ricardo Moraes)

“Yes, you are right,” the shaven-headed Zinkivskiy laughed when a reporter pointed out the work’s political nature as they sat recently in the white-tiled kitchen of his Kharkiv apartment.

“Russian soldiers really believed that, in Kharkiv and Kyiv, people would greet them with flowers,” he recalled. “But (they) met the Russians with Molotov cocktails.”

Still, Zinkivskiy maintained to the background thud of explosions from battles to the city’s north and east, his main reason for painting is not making political statements but “giving people something new to think about”.

“Normal life is coming back,” said Zinkivskiy, 35, who sometimes wears body armor while he paints. “War and bombs are not the only thing… We are stronger with art.”

Ideally, he would want to further his career in England. “But I don’t want to leave my city because I am helping to build a new city, a new country.”

Zinkivskiy was persuaded to back the war effort by carrying on painting by Vsevolod Kozhemyako, a prominent businessman who organized a volunteer militia to fight the Russians.

“I asked him to do the thing he does,” Kozhemyako said from the tailgate of a truck before heading to his unit’s positions outside the city. “We can, of course, teach him to shoot. But I think he is much more useful in this area.”

For Kozhemyako, who also supports internationally acclaimed Ukrainian poet and novelist Sergiy Zhedan, promoting the arts as the country battles for survival is more than just a way of maintaining public morale. 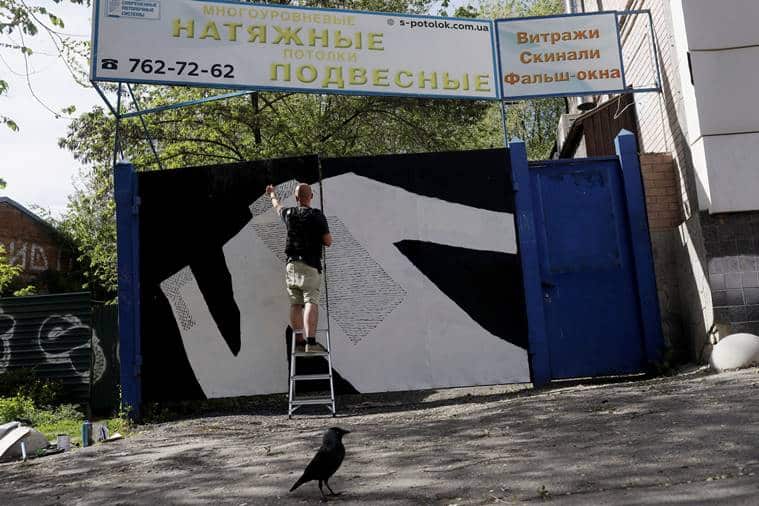 Gamlet Zinkivskiy works on his new painting, amid Russia’s attack on Ukraine, in Kharkiv. (REUTERS/Ricardo Moraes)

It also is a means, he said, to counter Russian President Vladimir Putin’s contention – part of his justification for what he calls a “special military operation” – that modern Ukraine is historically and culturally inseparable from Russia.

Ukrainian artists and writers “remind, first of all the people who live here, and the world and the Russians that we are a separate nation,” said Kozhemyako. “This is what they (Russians) do not understand.”

Zinkivskiy, who earns a living selling his studio art, paints in only grey, black and white.

He sketches his murals on cards in his studio before heading out to create the full-scale works. Some feature only Ukrainian words, including “Time Hears Us”, daubed in large black letters on what was an interior wall of a building exposed when Russian shellfire demolished the facade.

And some echo themes from the war, illustrating how ever-present the conflict is.

They include “I Keep Balance”. Painted on a set of large double doors, the mural depicts a man balanced on the edge of a white block, two birds sitting on an outstretched arm and the opposite hand holding body armor, a tourniquet attached.

In an act whose political message he does not deny, Zinkivskiy has expressed along one of the city’s main thoroughfares, the ire over what many Ukrainians consider Germany’s tardy support and appreciation for Britain’s military and financial backing.

Below the signs for Pushkin Street, named in the Soviet era, he painted “Britain Street” on walls at 10 intersections. In pre-Soviet times it was called Germany Street.

Previous Story:
Elliot Page opens up about his transition in new interview: ‘Transphobia is just so extreme’
Next Story:
New parents, here are answers to some FAQs concerning your newborn