After taking a break amid sexual assault allegations, fashion designer Alexander Wang’s comeback to the runway was greeted with adoration during his highly anticipated show in Los Angeles.

Some shouted “This is amazing!” and “I love it!” while others cheered on Wang’s 50-look collection for his “Fortune City” runway show that celebrated Asian-American culture in the historic Chinatown area Tuesday night.

Wang held his first show since 2019, just before several people accused him of sexual assault and drugging male and transgender models.

Wang initially denied the allegations – which first came in late 2020 – calling them “baseless.” Last year, he said in a statement that he disagreed with some of the accuser’s details adding he would “set a better example” as a public figure. A lawyer for the alleged victims later said Wang had met the accusers, saying, “We acknowledge Mr. Wang’s apology and we are moving forward.”

The accusations tarnished Wang’s brand, but did not fully cripple it – especially in China. He still dressed popular figures like Rihanna and Julia Fox while releasing a recent campaign with Lucy Liu. His brand is still being carried in some major retailers. 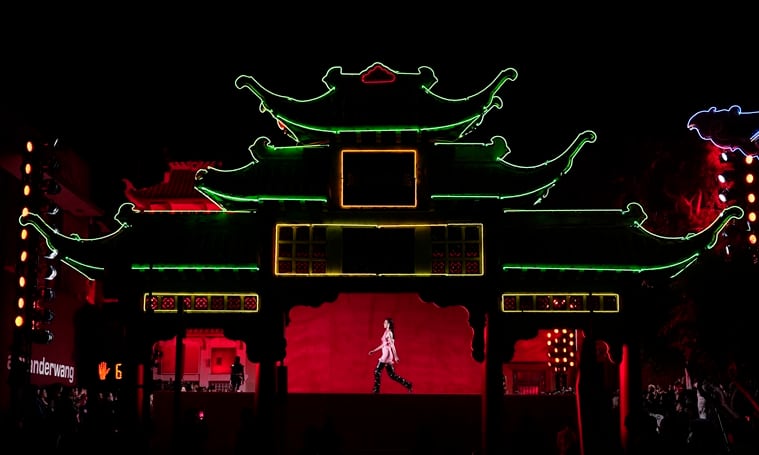 Tuesday night’s event had the support of 800 invitees who lined up to enter Wang’s show, where a red flood light covered the Central Plaza area. It was a splashy event with stars like Kimora Lee Simmons and Lisa Rinna sitting in the front row while others such as rappers Gunna and Coi Leray, actor Harry Hamlin, K-pop singer CL and model Behtai Prinsloo-Levine watched the 15-minute show.

Wang incorporated models with different ethnic backgrounds and sizes – including a pregnant Adriana Lima who received most of the applause for prancing down the runway with her exposed baby bump. The models sported a variety of pieces with shades of indigo and brown, denim and leather coats, red velour sweat suit, heavy wools shrunken into bike shorts, crop tops and oversized wool coats.

Once the show finished, Wang ran onto the stage with a big smile, waved at attendees — who were mostly dressed in all black — before he darted backstage. The show closed out with a heavy dose of red-colored confetti cascading over everyone, creating a party atmosphere — especially for those who attended the Asian night party that featured a market with local food vendors.

In the market, Wang had cameras following him the whole time. He had numerous people who greeted him with handshakes, hugs and lauded him for his work.